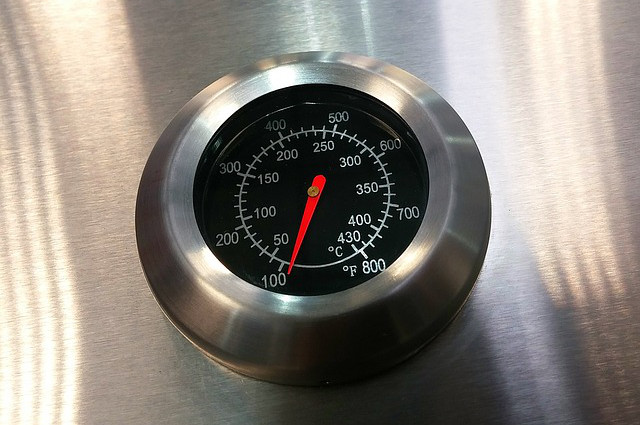 Vaping cannabis is done by vaporizers, which work by heating up marijuana to the point where cannabinoids are turned into vapor. The  compounds “boil” and evaporate, leaving behind fibrous plant matter. When you light up cannabis, the smoke is a mix of cannabinoids and a number of somewhat toxic combustion by-products, such as PAHs. In fact, analysis has shown that joint smoke only contains 10% cannabinoids, the rest is combustion products. In contrast, the clouds coming from a vaporizer contain up to 95% cannabinoids, with only small traces of PAHs. An added benefit is the fact that your bud will last longer thanks to the lower temperatures used in your vaporizer.

Is there a perfect temperature?

This is probably one of the questions you’d like to ask, so here are the key findings:

There’s a temperature range in which different compounds of cannabis are released, each showing unique qualities in effect. While only experimentation will show you the high that suits you best, an ideal temperature to extract a wide range of psychoactive compounds is 365ºF. The optimal temperature range for cannabis is between 347ºF – 392ºF (175ºC – 200ºC). Temperatures below 374ºF (190ºC) tend to produce a more cerebral high while temperatures above that tend to induce a body high.

Please note: Although some of the cannabinoids in these lists require temperatures about 392ºF (200ºC) to evaporate, vaping at that temperature runs the risk of causing combustion, which should be avoided.

Flavonoids, like terpenoids, are not that well known compared to cannabinoids. They are are a large class of plant pigments that are sometimes referred to as Vitamin P. Terpenoids and Flavonoids are partly responsible for the looks, taste and smell of a particular strain. they are the reason why cannabis enthusiasts take a whiff of a strain because their smell reveals a lot about the character of the plant.

They are also thought to have secondary health benefits, which will be explained in the following table:

Terpenoids are structurally related to terpenes and are naturally occurring in a wide range of plants. They play a role in what gives plants their unique aromatic quality. The scent of cinnamon and menthol are examples of well known terpenoids.

The following table outlines the effects and vaporization temperature of terpenoids:

Toxins are chemicals that can be harmful to your body. The advantage of a vaporizer lies in its unique ability to extract the active ingredients of cannabis, but without the toxins of combustion, such as tar and carbon monoxide. In short, vaping does not expose your lungs to as much harmful chemicals as smoking does.

Vapor can still contain trace amounts of toxins. Compared to the over 100 different PAHs found in smoke, the one single PAH discovered in vapor is obviously a massive improvement. On the other hand, toxins that come from pesticides, herbicides and other chemical agents will also concentrate in vapor – making organic cannabis a smart choice.

The following is a small selection of some of the toxins that are released through combustion:

When you use a bong or smoke a joint, extremely dry cannabis ruins your whole smoking experience. Vaping it is still a delightful experience. The dryness, however, will cause it too vaporize much faster. If it is too hot, you run the risk of flash boiling the active ingredients, eliminating the taste and flavor of your bud. As it is largely dependent on the situation and strain you are using, there is no definitive guide on how you can vaporize particularly dry weed.

Note: Set your temperature lower judging by how dry your weed is. It might take a bit of practice at first but once you get the hang of it, you won’t have to worry about flash boiling it.

Conversely, if your bud is fresh, it may be very high in moisture. As a result, it can sometimes be hard to vaporize it efficiently. To deal with this, you can set your vape between 280ºF (138ºC) to 298ºF (148ºC). You’ll gain a load of flavonoid vapor whilst slowly drying out your cannabis. After you did this, your pot should be dry enough to vaporize efficiently at the cannabinoid temperatures.

Cannabis and Your Relationship